Buffy the Vampire Slayer and Angel the Series Stories

Buffy - After the Shows End

The "Where Do We Go From Here?" series 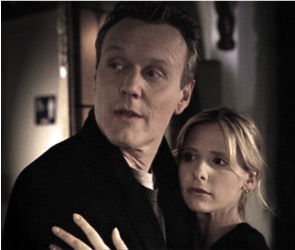 It took me a long time to warm up to the Buffy/Giles pairing, but now I love it. This is more than just a romance; it's also picking up Buffy's story after the events in the Angel eps "The Girl in Question" and "Not Fade Away."

Angel Season Five and Beyond

Blue Rain Falling (PG-13)   -   Starts when the Angel series finale "Not Fade Away" ends. Who walked out of that alley? And what was waiting for them?

Misery Loves Company (R)   -  Found this about a third done in my WIP file and had a jones to spend some time in the Buffyverse. This is AU if you buy that the comics are canon. I'm going to pretend that Season 8 and beyond of Buffy and anything past "Not Fade Away" on Angel never happened. This is Buffy/Giles-if you don't like that, best move on.

One Too Many (PG-13)   -   I don't know that this goes with any of the Buffy/Giles stories that I've done before. And Joss & company are slowly making all my stuff AU anyway with the (totally awesome) comics. So this is set sometimes after Buffy and Angel ended.

Someone Else's Hell (PG-13)   -   This directly follows the Angel season five ep "Damage." I hated the way it ended and I wanted to know what happened to Dana, the pyscho slayer. Even though I've tried to keep in line with what's been happening in the Buffy season eight comics, there aren't any spoilers here for those.

Something Worth Living For (R)   -   The events of "I Will Remember You" are over and gone, except for in Angel's memories. But what if he does become human some day? Is there any kind of happy ending for him with Buffy? Written for bhoney as part of the Support Stacie Auction. (They needed a pinch hitter; I wanted to write an Angel becomes human fic--I think they call that serendipity.

Starting Over (PG-13)   -   This fills in the blanks from Giles' POV from the Buffy S7 ep "Lies My Parents Told Me" to Angel S5 ep "The Girl in Question," and it's not contradictory to the Season 8 comics (slight spoilers for issue 1). This is BuffyGilesish. Look away if you're averse.

Twisted (PG-13)   -   Smashed/Wrecked post-ep. Tired of the lecturing and feeling bad for the characters, I dodge the anvil and write this.

One Fun Little Hobby (PG)   -   Gone post-ep. Bored now. At least with the magic as addiction theme. Can you tell?

She Slays Vampires, Doesn't She? (PG)   -   Doublemeat Palace post-ep. I didn't like how things were going so I wrote this story. It's part parody, part course correction. I've been told it's funny. Enjoy.

Just the Same (PG)   -   Dead Things post-ep. This episode really disturbed me. And reminded me of something. So I wrote this. You'll be a little confused at first, but you'll figure it out...eventually.

I Wish I May, I Wish I Might (R)   -   Hell's Bells/Normal Again post-ep. So where was Anya during Normal Again? Subtitle this one "Lament of the Secondary Characters." And yeah, it's evil. Really, really evil.

Fate (PG-13)   -   Sixth Season post-ep. So about season six. Hmmmm. Not loving it. So I'm not really sure where this came from. But it was rolling around inside my head and then it wanted out. Well after the finale. Hope you like. 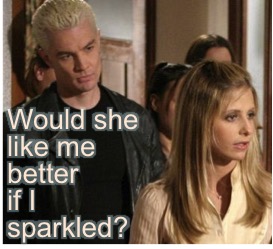 Gravity (AU)   -   It's a whole new Sunnydale now that the Gift has been given. What happens to Dawn when her family is gone? And to the Scoobies now that their reason for coming together is no more? How does life go on, and how do you get back what's been lost? This was written before season five aired so it was made AU quickly. But in the summer between the seasons, anything was possible.

Buffy Season Five Post-ep -   From Into the Woods on...

The Woods Suck (PG-13)   -   Didn't like the ending of Into the Woods? Maybe this will make it more palatable?

A View of the Woods (PG)   -   The Scoobie view after the events of Into the Woods.

Visiting Hours (PG)   -   Joyce has a visitor, set sometime after Into the Woods.

Watch Me (PG)   -   Buffy's having a bad night, set sometime after Into the Woods.

Gossip (PG)   -   Word reaches LA through an unlikely messenger, set after Into the Woods and Angel Reunion.

Crushed (PG)   -   What happened after the door closed in Crush.

Vigil in Accustomed Places (PG)   -   You've sat this vigil more nights than you can count. (An exchange fic. Prompt was Joyce and "Bloodless.")

A Sea Change (PG)   -   Post-Intervention. Let's have a bit more of that great last scene.

Sinking   -   Listening to Fear Post-ep. (AU)(PG-13)     At the time I wrote this, there were only possibilities for how the Riley issue could play out. Now that it is over, this is resigned to the realm of AU. But I still like it.

Love is Blonde - (AU) (PG-13)     This was written before Disharmony. It's pretty much been overtaken by the events of that ep, but Harmony still wanted it posted. She is so demanding. Somebody tell her to leave me alone. Please?!? 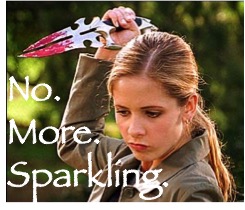